My Friends - do you understand why I never put my full "faith" in humans! esp humans in the entertainment business/politics/or even the leaders of the Church of Christ!!

The entire article can be read via the link:

The much-loved children’s stories have an unapologetic Christian message.

C. S. Lewis was clear that the character of Aslan in his Chronicles of Narnia is based on Christ.

But actor Liam Neeson, who voices the lion in the latest Narnia film, has prompted a row after claiming his character is also based on other religious leaders such as Mohammed and Buddha. 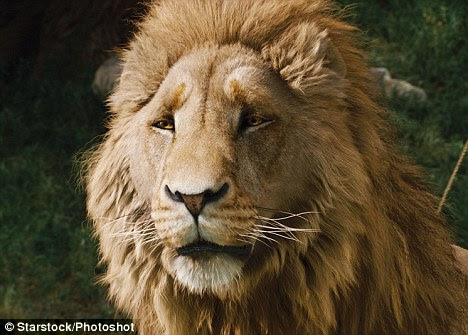 Symbol of Christ: The Character of Aslan, voiced by Neeson, was stated by its author C.S. Lewis as Christian

Posted by christian soldier at 1:05 PM

This gave me a new post. Here it is in draft:

As if any more proof was needed that good acting does not equate to good theology ( ... or necessarily to a good anything else for that matter) Liam Neeson, the voice for Aslan in the Narnia movies has been quoted as saying that "Aslan symbolises a Christ-like figure but he also symbolizes for me Mohammed, Buddha and all the great spiritual leaders and prophets over the centuries".

In Neeson's world I'm sure that's how he sees it. And he is perfectly within his right to make for himself the crutch he obviously needs to make sense of his life by making up a world to live in more fictitious than the one within which his character exists. But on the subject of Mohammad and Islam, as with the subject of Jesus Christ and Christianity, Lewis was not silent in this series.

Who could read "A Horse And His Boy" and not make the connections between the Talamarines and Islam, Tisrok and Mahammad, and Tash and Allah? Interestingly, Lewis almost prophetically anticipates Neeson's sentiments in his concluding book in the series. In "The Last Battle" A deceptive coup takes place in Narnia while the King is away. The would-be new king, named Shift, is claiming that Aslan has decreed that Aslan and the Tash are One; that in fact the Talamarines and the Narnians have always served the same God. There's only one problem. While Shift, who in reality has little regard for Aslan but only wants to enjoy his authority to create for himself a life of ease, has no problem publicly making these universal claims, the Talamrines are clearly not willing in the story. They simply play along and only see this as an opportunity to infiltrate and subdue Narnia.

Likewise, while Neeson sees himself as a Catholic, i.e. Christian, but is yet willing to see Aslan as also symbolic of Muhammad, and while many "Christians" are willing to join him in his dream world, they forget one important fact. Aslan was murdered. In fact he willingly gave himself over to be murdered. For the Muslim this is an untenable and blasphemous symbolism. They are not willing to join Neeson and his liberal band of brothers in their fantasy land; especially if it means the death of their profit, symbolic or otherwise.

So we clearly have a case here where a fictitious story is more real than the Utopian paradise mistaken for reality created in the minds of liberal Christians.

The first time I read the Narnia Chronicles I saw the link between the Talamarines and islam.

It is obvious Neeson never read any of Narnia beyond his script.

I've always enjoyed his movies, but he's now long me as a fan as well.

Narnia, Golden Compass, Lion King, Little Mer-Maid, The Hobbit, Harry Potter, Aladdin's Lamp, He-Man, and others are all stories for the young; to confuse and create doubt.
If but a few fall under this message of confusion, and to be doubtful--their job is done.
Then they have mouthpieces to explain away. Some see as some sort of reorganizing the social engineering of a unbelieving society to many paths to...

TS/WS-interesting take-
off all that you mention-I see Potter as being the most deceptive...

Looks like Liam has been skipping his meds again.